-4% discount on your orders with the 1001prime card 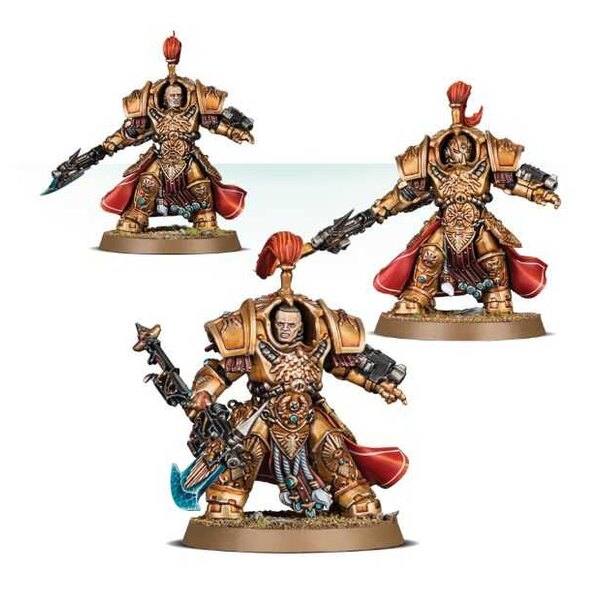 In the early days of the Imperium, he fought alongside the Emperor in person, and offered a grandiose spectacle worthy of the majesty of the Master of Humanity.

In the same way that the arms and armor of the Adeptus Custodes always translate this martial glory, he wears his vexillas, or standards of war, by his most valiant veterans.

The companies-ramparts rarely fight without vexilla to their head.

This plastic kit contains the necessary components to assemble a Vexilus Praetor in armor Terminator Allarus.

The Vexilus Praetor's standard armament is a Balistus hand-grenade launcher and a mercy, but instead of a guardian's spear or a castellan's ax, he brandishes a large ornamented vexilla.

This emblem is almost twice as large as the Praetor itself (without the plumet), and it inspires bravery, with its enormous two-headed eagle adorned with gems, spikes and cords.

The Praetor can be assembled with or without helm.

Allars Custodians may be armed with guardian spears or Castellan axes and Balistus grenade launcher as well as mercy.

The Shield-Captain has shoulder pads, leggings, a plumet and a mercy of its own.

To learn more about size and scale, click here.

Who is the manufacturer games workshop?

Games Workshop is known in the creation of figurines, the most famous of which are Warhammer, Blood Bowl or Warmaster or Mordheim.

All you have to know about the manufacturer Games Workshop

Who is the manufacturer games workshop?

Games Workshop is an English company expert in making Warhammer figurines. She is known for publishing medieval fantasy or futuristic wargames. It produces versions such as Gorkamorka, Battlefleet Gothic, Necromunda, Inquisitor,Epicor Warhammer 40,000 for the futuristic and Blood Bowl, Warmaster, Mordheim or Warhammer for the fantastic.

The company also published White Dwarfmagazine, which was entirely dedicated to major board games such as The Lord of the Rings. In addition, it has allowed the birth of other universes with strong identities, having also made its success. Designers, "historical" sculptors and illustrators of the brand have used creativity to bring out a unique graphic design and description, mixing history, art, myths and various references to fantasy, literature or science fiction. The result is:

As part of the company, Warhammer Fantasy is a fantasy world essentially inspired by planet Earth, including its geography. Thus, several countries of the Old World are representations of some European countries of the Renaissance among others.

Also owned by society, this universe is a futuristic vision of the galaxy in the 41st millennium and not a futuristic representation of Warhammer. In this imaginary world, humans find themselves under the domination of the Imperium, a totalitarian theocracy. If some races of aliens have some similarities with the Warhammer characters andheroic fantasy such as the Eldars or the armies of Chaos, some more original such as the Tyranids draw their characteristics from the Aliens of the eponymous film.

In 2015, Warhammer gave way to Warhammer Age of Sigmar. By collapsing, this Old World has nevertheless retained some of its entities, in their initial form or revisited.

What are the themes of the Games Workshop figurines?

Games Workshop is a must when it comes to miniaturesgames. It offers for this purpose several themes focused in particular around fantastic figurines and futuristic figurines. The warhammer collection includes among other things different warhammer figurines with an impressive design. Other ranges are to be discovered in all Games Workshop France stores or in Maxi Rêves boutiques.

What are the different armies of Games Workshop figurines?

The Games Workshop minifigures are available in different powerful legions that players will choose according to the scenario to be staged. These armies count in their ranks among others:

● The Spaces Marines or elite force of the Imperium;

The Warhammer Armies of Chaos

● All Armies of Order;

Cyril is a collector and a fan of imaginary cultures. He shares his passion with you and accompanies you in your 1001 Hobbies customer journey, presenting you with the essential action figures and guiding you in building your collection!

Miniature games
Warlord Games WL-301510002
Waterloo 2nd edition Starter Set
$155.99 In stock at our supplier, shipped from our warehouse within 10-14 business days after your order

From the same category

Thank you very much!

The site was easy to use and has real choices.

Site is easy to navigate.

No results in products

No results in categories